The Report on Domestic Book Trade brings good news for the publishing sector, as in 2021 there was a 6.4% increase in titles published over the previous year (8.9 in print and 1.2% in digital), reaching 79,373 copies.

The Spanish publishing sector continued its growth in 2021, reaching the highest increase in turnover so far this century. This is reflected in the Domestic Book Trade 2021 report, which shows that sales of Spanish publishers as a whole grew 5.6% over the previous year, reaching 2,576.70 million euros invoiced. This increase is higher than that of the previous year, which was 2.4%. It is important to note that this increase is due to the growth in the number of copies sold in print, 174.10 million copies, 5.9% more than in the previous year. Likewise, in 2021 there were 13.49 million downloads of digital titles, 1.7% more than in 2020.

Prepared by the Federation of Publishers’ Guilds of Spain, and with the support of the Ministry of Culture and Sport, the advance of the Report on Domestic Book Trade reveals that in 2021 there was an increase of 6.4% in titles published over the previous year (8.9 on paper and 1.2% in digital), reaching 79,373 copies (55,197 on paper and 24,176 in digital). The average price per copy stands at 13.97 euros in 2021.

«The figures reflect the impressions we had gathered over the past year. Both the increase in sales and in reading rates are positive news both for the publishing sector as a whole and also for our cultural progress. We must continue working to recover the figures for the foreign market, which are still affected by everything that has happened over the last two years,» explains Daniel Fernández, president of the Spanish Federation of Publishers’ Guilds.

A relevant aspect that emerges from the report is that sales rose across the board in all book subsectors, except for textbooks. The subsector that grew the most in turnover was children’s and young people’s books, which, with a 17.8% increase over the previous year, reached 432.24 million euros, followed by adult fiction (+8.2%), with sales of 548.90 million euros. Non-fiction books increased their sales by 7.7% to 770.92 million euros. For its part, the comics, comic books, and graphic novels subsector grew 6.7% with respect to 2020. 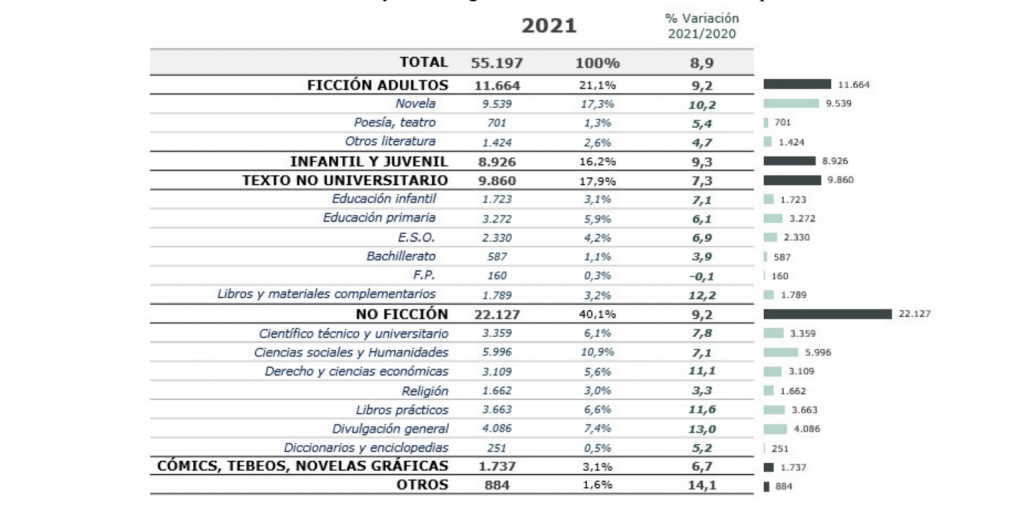 Turnover in the textbook subsector continues to decline, with 3.8% fewer sales than last year. The year 2021 was a year of transition to a new educational law, the LOMLOE, which meant that many autonomous communities with models of aid to families through a loan system decided not to renew the corresponding books because they had reached the end of their periods of validity. This is the main factor that has influenced the current situation of the market for this type of book.

Digital publishing accounted for 5.2% of total turnover in 2021, reaching 134.79 million euros in sales. This reflects an increase of 6.8% over the previous year. The number of titles published also increased slightly (+1.2%), with a total of 24,176 titles, which means continuing to increase the supply of digital titles, which stood at 186,887 titles. Regarding turnover by subject, non-fiction books continue to hold first place, with around 60% of the total. The children’s and young adult genres recorded the highest growth of 17.8% compared to 2020. As also happened the previous year, textbook turnover fell 2.1%, being the only subject to experience a decrease over 2020.

Bookstores are positioned, following in the wake of previous years, as the first distribution channel for books, invoicing around 900 million euros in 2021, which implies 35.2% of the total and 8.2% more than the previous year. This, added to the sales recorded by bookstore chains (18.6%), represents 53.8% of the total. The biggest increase in the turnover of books in paper format is in the Internet channel, as was the case the previous year, although on this occasion the percentage increase was slightly lower, standing at 23.9% of variation concerning 2020. Through this channel, 51 million euros were invoiced, 10 million more than in 2020.

The publishing sector and foreign trade

Less positive were the figures for the foreign book trade in 2021. The fall recorded as a result of the restrictions on the movement of people and goods due to the pandemic continued this year, mainly due to sales in the graphic arts sector. Exports from the book sector recorded a 0.7% drop to 388.91 million euros, compared to 391.76 million euros in 2020.

An analysis of the composition of exports shows that the fall is due to the decline in sales abroad of the graphic arts sector (43.88 million euros in 2021 compared to 51.18 in 2020) since the publishing sector did increase its turnover compared to the previous year. It went from 340.57 in 2020 to 345.03 in 2021, up 1.3%. By geographical area, Latin America continues to be the main area for Spanish exports. In 2021, the book sector exported goods and services, mainly books, worth 180.66 million euros, 2.07% less than in 2020. For its part, the sector exported €136.35 million to Europe, 8.54% more than in the previous year. It is also important to note that there has been an increase in exports to Africa, Asia, and Oceania.

As for imports, there was also a drop in imports. In 2021, the book sector imported goods and services, mainly books, to the value of 105.86 million euros. The balance of trade balance remains positive and reached 283.05 million euros, 32.21 million more than in 2020.

More than 150 independent bookstores select the featured books of the month
The success of the Buenos Aires Independent Publishers Fair during the second wave of contagions
Presentation of the Book Day, Sant Jordi 2022
Celebrate FiLQ from December 15 to 19