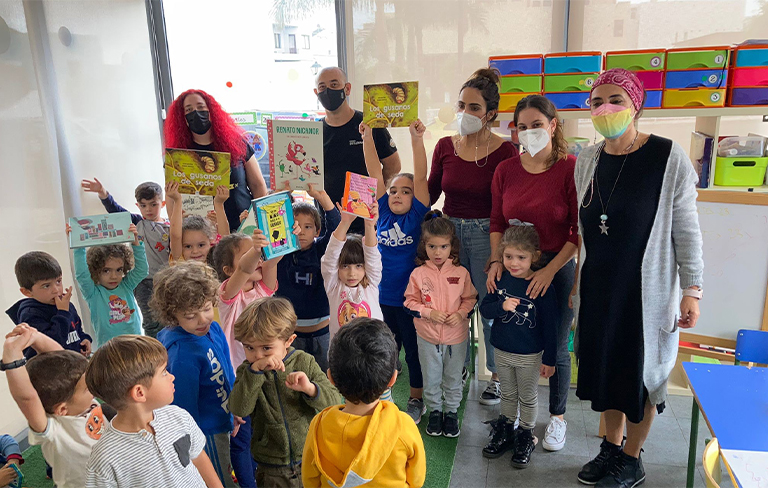 This festival, which has been held for years in Tres Cantos, a reference in the world of children’s and young people’s literature in the national territory, this year has a more solidary version since from April 28 to May 1 a special edition will be held on the island of La Palma.

The Festival de Literatura Infantil y Juvenil de Tres Cantos (FESTILIJ3C) celebrated its V edition from February 3 to 6 in the Lope de Vega library, where multiple activities were organized around the world of children’s and young people’s literature with the presence of the literary stars of this modality.

From Tres Cantos to the island of La Palma…

In addition, the festival of children’s and youth literature, FESTILIJ 2022 will hold a special edition on the island of La Palma from April 28 to May 1, specifically in Los Llanos de Aridane, in the municipal library María Nieves Pérez Acosta, with the aim of encouraging the donation of books for schools and libraries that have lost their copies after the eruption of the Cumbre Vieja volcano and on the other hand, to bring children and adolescents of La Palma closer to the authors of their favorite books.

To consolidate this alliance between the two festivals, the councilor of culture of Los Llanos de Aridane, Charo González Palmero will be present at the opening of FESTILIJ3C 2022 in Tres Cantos.

Donation of books for the island of La Palma

So far, a trip has been made in order to donate books to both teachers and students of several schools in La Palma. In that first trip, 400 books for adults were collected, and in the next one, coinciding with the festival itself, 2,000 books of children’s literature will be donated with the help of the publishing house Penguin Random House.

Elena Martínez Blanco, writer and bookseller, as well as manager of Serendipias bookstore in the town of Tres Cantos, was recognized in 2020 for being «La librera en bici», bringing literature closer to homes by bicycle during confinement. Overturned with the literary world focused on the youngest readers, she organizes every year the Festival de Literatura Infantil y Juvenil de Tres Cantos (FESTILIJ3C) recognized nationally and internationally. These initiatives have been very well received by the bookseller’s sector, who have recognized her work by naming her vice-president of the Booksellers Guild of Madrid.

Popularly known as «Bicilibrera» or «bookseller by bike», she became an icon during the hardest moment of the pandemic for having the initiative to transport on her bicycle the books that her customers requested by Internet or telephone in order to keep her business afloat and bring literature closer to the neighbors.

Such was the popularity of this initiative that the bookseller managed to sell more copies than with the store open. For this atypical work, she was highlighted in multiple national, local, and cultural media such as El País, El Confidencial, La Vanguardia, RNE, La Cope, La Sexta, and Cadena Ser among others. After the success achieved since then and thanks to the loyalty of its clientele, «la librera en bici» has announced that it will open a second bookstore in Tres Cantos in March 2022.

In the summer, Elena Martinez received a call from the President of the Government inviting her to attend the ceremony recognizing the work of the health workers at the Royal Palace as part of the «society» that participated in extraordinary work for others during the confinement.

In addition, she is currently the first vice-president of the Madrid Booksellers Guild. A position she has held since November 2021 and has participated on numerous occasions in the Madrid Book Fair.