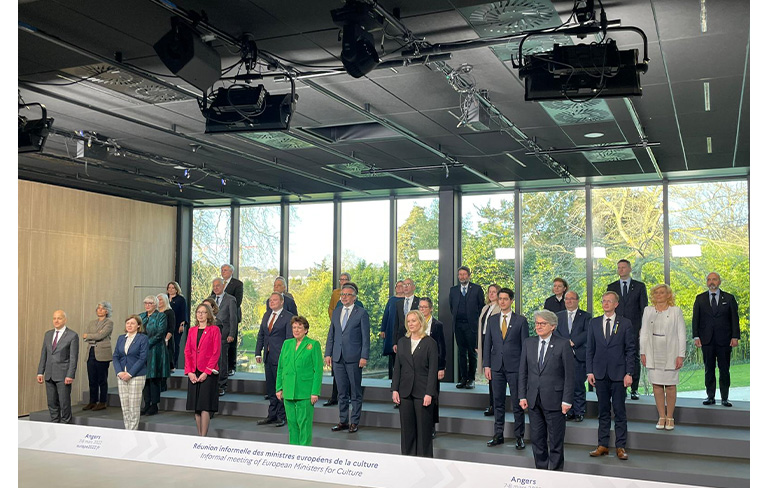 Spain joins the joint declaration of solidarity with Ukraine approved at the informal meeting of EU Ministers of Culture.

The Minister of Culture and Sport, Miquel Iceta, has focused his speech at the Informal Meeting of EU Culture Ministers, calling for unity: «from culture, we must join forces to confront barbarism.»

«We must all work together to defend democratic values, which are the heart of Europe: freedom of creation, thought, and expression, cultural diversity, and pluralism, as well as sovereignty and territorial integrity,» he insisted.

Iceta assured that «Spain will participate in a coordinated way in all the initiatives that are taken to defend everything that art embodies so well: freedom, independence, and a critical view». «We will support and join forces to support Ukrainian artists and institutions, so that they can continue their activity, preserving their freedom of creation and expression. And we will join forces to preserve the rich Ukrainian cultural and historical heritage.»

The informal meeting of European Union culture ministers kicked off in Angers, France, with a working session at which a joint declaration on the situation in Ukraine has been unanimously adopted.

The declaration shows solidarity with the Ukrainian people, their struggle for freedom, sovereignty, independence, and coordinated work to protect cultural heritage. It also stresses support for Ukrainian artists, journalists, cultural and media professionals and shows readiness to assist them together with their international partners.

It also expresses support for media and journalists covering «military aggression against Ukraine independently and impartially» and stresses the need to ensure their physical protection.

In addition, emphasis is placed on the defense of freedom of expression and information, as well as freedom and plurality of the media. It also denounces «the manipulation of information and disinformation campaigns, from which the citizens affected by this military aggression must be protected».

This afternoon, the minister will participate in the second working session, dedicated to the future of the media in Europe and the strengthening of cultural diversity on the Internet.

For his part, the next working sessions will focus on the protection of heritage, the fight against illicit trafficking, and, finally, the valuation of heritage.

Cerlalc maps the situation of the book industry in Ibero-America
Recovery of Mexico's publishing industry
Eva Orúe: "I will respect the essence of the fair, but I want it to gain in ambition"
Brazil's Leitura Bookstore increases sales and competes with Amazon