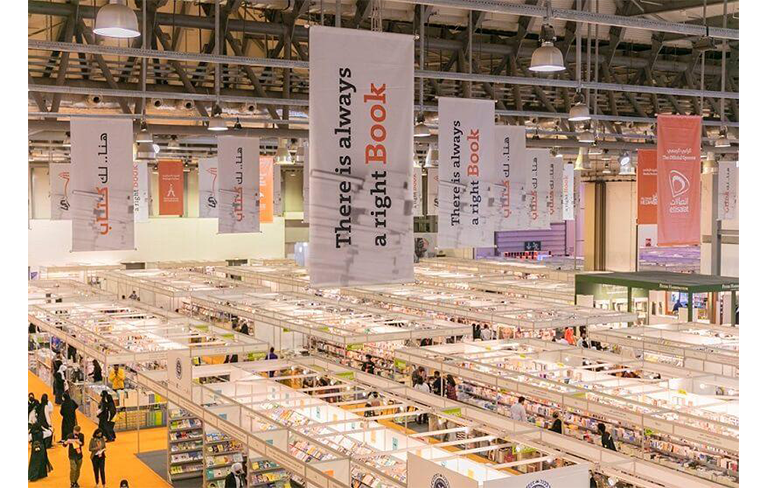 The Sharjah Book Fair claims to be the world’s leading book fair.

At the end of the first week of the Sharjah International Book Fair (SIBF), the balance could not be more favorable, according to the data obtained from the Publishers’ Conference, held as one of the major events of the fair. Of the 1,632 publishers and literary agents in attendance from 83 countries, 546 of them concluded sales of rights that President Ahmed bin Rakkad al-Ameri describes as historic.

This fair, considered the third in the world and the first in the Islamic world has inaugurated by the Emir of Sharhaj, Sheik Sultan Bin Mohammed al-Qasimi with the slogan «There is always the book you need»

«There is always the book you need»

The fair showcases more than 15 million books, including 1.3 million exclusive titles. 110.000 are on display for the first time in the Emirate of Sharjah. At the end of the conference, Al-Ameri tells the Atalayar media outlet that «the goal of becoming not only the first point of the publishing industry in the Arab world but in the entire planet has achieved ahead of time.» He considers it a good end to the first week after having attended as a guest country several of the important book fairs such as Paris, Moscow, Madrid, New Delhi, and Sao Paulo.

Despite the increase in digitization, Al-Ameri denies that paper will give up its leadership as the main reading medium. He recalls that during the 2014 Sao Paulo conference the publishing industry favored the e-book as the primary medium of the future. «That has not been the case. We are in 2021, and more and more I observe that readers, the veterans of course but also a large part of the new ones decant their preferences for paper. I believe that the touch and smell of books provoke irreplaceable sensations». However, he qualifies himself that there will be an explosion in the production of audiobooks.

Miriam Llano, vice-president of the Spanish Chamber of Commerce in the UAE, finds it a milestone that at the official opening of the fair by the emir of Sharjah more Spanish than English spoken, in a territory where English is effectively and with great advantage the second language. «Spain is increasingly seen here as a cultural as well as a tourist destination,» says the Spanish Embassy’s tourism counselor, Daniel Rosad.

Hipatia, the great teacher of Alexandria is just one of the hundreds of books in Spanish that have filled the Spanish stand at the United Arab Emirates Fair, the most important in the Arab world, which brings together in this 40th edition more than 1,632 publishers from all over the world, with Spain as the guest of honor.

The export of books in Spain has always had a natural market, which is Latin America. The language and shared culture are an advantage for Spanish distributors to do business on that side of the world. However, history is also common in Arab countries, and for the book industry, the best way to enter that area is in Sharjah, one of the seven emirates that make up the country.

«The Sharjah fair is very important for us. For Spain, the Latin American market is key, where we have a very significant presence. The European one, in which we are growing, we were certifying that will in the Frankfurt fair; but now we want to open more doors to the East, and the door of the East to the book is Sharjah, that’s why we are here», in the words of the Spanish Minister of Culture.

In his first visit to the Emirates, Iceta wanted to show his support to the publishers and distributors who have been opening the business for all Arab markets for three days, with great success, according to the businessmen themselves.

Luis Zendrera, manager of the publishing house Juventud and president of the Spanish Association of Children’s and Young People’s Books, said that in the first three days for professionals – the SIBF is open to the public until November 13 – «many rights have been sold and bought. It has been non-stop.

«The Arab countries are becoming more important, and there are Spanish publishers who have been coming to this fair for many years and with great success,» he explained to Zendrera for El Español.

There is still another week to go, and we expect the same intensity as the first week of this International Book Fair, which has already welcomed 83 great authors from 22 countries, among them the latest Nobel Prize winner. The fair will end its celebration with more than a thousand cultural activities, 440 conferences, literary debates, and, above all, 355 workshops dedicated to children, «the future of culture and civilization.» in words of the executive president of the fair.