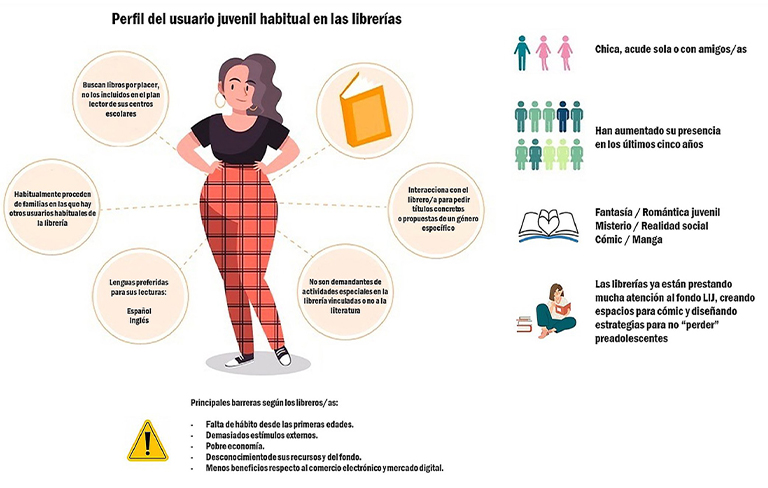 Young people and reading. Qualitative report and proposals (Contemporary Laboratory for the Promotion of Reading) by the Germán Sánchez Ruíperez Foundation.

The Germán Sánchez Ruíperez Foundation provides us with this report on young people and their reading habits. This study has been executed and organized to better understand the relationship of these people with reading using tools of a qualitative nature.

As shown by the data that appear in other studies such as the Study on Reading Habits and Book Purchasing, published year after year by the Federation of Publishers’ Guilds of Spain (FGEE), children and young people (especially women) are the age groups with the most frequent and intense relationship with reading. They are also the biggest consumers of movies, music, sports, eSports, series on VoD platforms, and those who surf the Internet the most; in other words, they are the most curious or regular readers.

The starting premise of the Fundación Germán Sánchez Ruipérez (FGSR) was based on investigating more about the causes of these behaviors, trying to provide some hypothesis about the future relationship with reading and understanding what are the stimuli or reasons for reading and what are the variables that influence to a greater extent their relationship with reading books, their will, preferences, stimuli, obstacles, and other factors.

This inquiry is formulated at a time when, in spite of probable methodological errors, important challenges regarding children’s reading skills were noted in the last PISA report and doubts about the future relationship with the reading of adolescents and young people were noted.

The impact on reading behavior could be formulated as follows:

Survey 1. Impact of technology on reading habits: Opinion is divided regarding the impact of technology and, especially, the constant presence of cell phones in our lives in relation to the possible decrease or increase in reading habits. Almost equal parts believe that screens have a strong impact in distracting or interrupting readers and that, from a positive perspective, they have contributed to the development of new platforms for reading or reading even different formats to paper.

Survey 2. On the time in which the reader distances himself from reading: There are no great percentage differences in the answers to this question, although a good part believes that it was in adolescence especially when there was abandonment or «rupture» with the reading habit. The young people themselves coincide in the focus groups, almost unanimously, on the contrary: the present moment is the one in which they are reading the most in their lives and reading works of higher quality or transcendental-decisive works.

Survey 3. Which people influence us to consume more literature: family and friends, although people close to us are the ones who seem to exert a decisive power to bring us closer to books, even at a great distance from the new literature prescribing agents that have been emerging in the chain, such as bloggers, book tubers, bookstagrammers. In the responses of young people, their greater dependence on these new profiles contrasts, although it is still not a majority.

Survey 4. How much influence do personal relationships have on reading: The answers to the previous question are reinforced by the answers, in this case, most of them declaring that a large part of the «blame» for their being readers today lies with those trusted people who once knew how to transmit to them the love of reading.

Survey 5. What period of your life has been most influenced by certain literary works? In this case, the answers of the unidentified public coincide with those of the young people consulted in the specific groups. Regardless of the supposed «desertions» in the field of reading that have occurred in youth, it is in that period in which the works that have influenced us in an outstanding way have passed through our hands.

Survey 6: What is the usual reading medium. Although the data show that in recent years the advance of digital reading has been increasing, in all the age groups consulted they opt for the paper book, a material and a format that carry implicit extra connotations not only linked to the convenience or readability of the texts.

Survey 7: About the situation in which we are living, what provokes us. Reading. Has your number of readings increased during confinement following the first months of the pandemic.

Survey 8: Has the library we have at home continued to increase in recent years? In the months following the quarantine, readers again turned to acquire new titles to further augment the family library, to the detriment of other more economical options» such as library lending, e-books (which are marketed at a lower price), or other avenues.

The vision that young people have would show us that the most relevant challenges of reading would be the following.