New challenges of publishing: In Frankfurt, you’re not looking for a needle in a haystack but Frankfurt is a haystack with lots and lots of needles 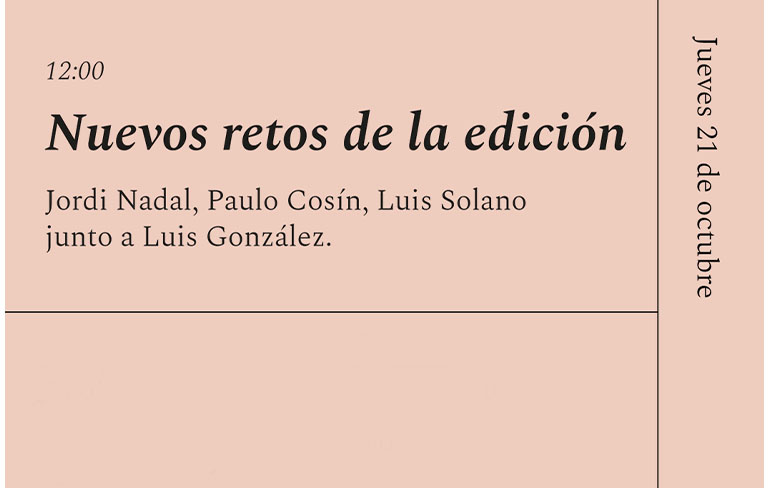 New challenges in publishing: In recent years, publishing has had to adapt to technological changes and new reading habits. The pandemic has been a challenge for the sector, which has nevertheless managed to increase readership and innovate in order to bring books to the reader and connect authors with the public. Publishers and booksellers discuss the new realities and opportunities in publishing.

Axes of the challenges

Jordi Nadal, director of the independent publishing house Plataforma, is taking part in the talk with pre-recorded voice messages as he is at the Frankfurt fair. The director of Plataforma spoke very clearly about the sector and the space it provides or provides itself: «When we reflect with publishers about the space, and in relation to the Frankfurt fair, there is an essential prerequisite, which is the desire and hunger of the publisher to seek conversations, partners, talent, good content… In Frankfurt, you are not looking for a needle in a haystack but Frankfurt is a haystack with many, many needles».

There are three axes on which to pilot our work: one is time, another is talent and the last one is resources, the money you have. Having talent is the best thing, we live on the confidence we generate and emanate. «Talent includes languages and cosmopolitanism. Talent always finds its way and creates spaces».

At Buchmesse we are compressed for time, we can’t have eight thousand appointments, at most 30 or 40. We can have a Frankfurt often, depending on how we manage time. «If we have time we have a better quality look, we filter better and we have more criteria. Frankfurt is adrenaline-pumping and that makes us find the promise of an important book».

«If you have money everything is easier. Because if you are in a country that competes with very powerful publishing groups and you are not part of them, you have disadvantages. Here, talent may or may not be there. The wallet is less of a mystery. The technical time and the deep, consented, more qualitative time, with a more qualitative look, comes along with the goddess of fortune: luck».

Spain’s role as one of Europe’s powers

«How do we explain to new readers what we are doing?» The moderator asked Luis Solano of Libros del Asteroide.

Luis Solano’s speech reinforces everything that publishers and agents in the book sector have already experienced at the LIBER fair. The publisher responds: «this is more complex than ever given that the noise and leisure alternatives to choose a book is greater than ever, and that makes the role of the publisher is not more superfluous than before but quite the opposite. The operation from the time the book has been produced until it reaches the reader is much greater than ever, in terms of promotion».

The work of a publisher is now more justified than it was sixteen years ago, although in most cases it seems invisible, because, as Solano points out, «we used to do three things in the publishing house and now we have to do 25 or 30 different things for each book because we cannot reach everywhere with the same intensity».

Luis González questioned Solano again, asking him about the selection criteria in the figure of the editor. «In Libros del Asteroide we keep it. The strategy is to create a powerful brand».

There are publishing areas in which the author is a brand to be defended and the reader goes to his brand and not to the publisher’s brand. «Even if you have a powerful author, there is a lot of work that the author alone cannot do with the value of his or her name».

Paulo Cosín, engineer and current vice-president of the Madrid Publishers Association, responds briefly to Solano by stating that the brand is important depending on the publishing model we have. To this end, Paulo Cosín poses four keys to looking at the new publishing challenges to know what model we need. «It is important to know what books we have. The new model is simply that of self-publishing. What is the key in this world? Well, trust, partnerships, not being alone. This brings us to another important element, the associations that defend our same vision: the network of libraries and bookstores. Another important element is to know the environment we are in. Here we publish in Spanish, which allows us the possibility of reaching the whole world, given that part of what we do is translated into other languages».

The speakers present emphasized the power of collaboration, the insertion of digital implants in an analog industry that takes care of the quality of the design, but at the same time takes advantage of the possibility of competing more effectively.

Luis Solano took the floor again, responding to what Jordi Nadal commented at the beginning of the conference regarding talent. «I think it is important, but I believe that the profession is more important».

He also took up the subject of collaborations, commenting with Luis and Paulo that not only are associations beneficial to the sector but that the intermediate parties, such as distribution and booksellers and journalists, are more than important agents in the book chain. «They are the main partners of the publishing house».

We must work together to be visible, if we work in isolation we cannot move forward. The bibliodiversity day was already echoed because it helps independent publishers and fairs are being held to highlight these ties.

«What the publisher works with is a creation and competencies that Luis has called craft. There we find ourselves with an absolute leadership force». Gonzalez adds and asks if there is a time when we can take advantage of this positive wave of literature to strengthen the economy.

To this, Luis Solano answers yes: «we have been fortunate that before the pandemic the level of reading increased, along with the sale of books. Despite the fact that the sale of physical books has also increased through the Internet, not only Amazon but also in bookstores that have a digital platform».

In recent years it seems that in Spain and LATAM there has been an increase in new small bookstores and that independent publishers have also emerged, which do fundamental work in favor of cultural diversity. Solid projects that have had something to do with the increase in these signs of reading.

«There is something wrong with the publishing business structure in Spain, given that there are two sectors that monopolize the market and that is an issue that we do not know if it can be remedied but it is an issue that should be talked about. If we compare the Spanish publishing panorama of medium-sized publishing houses… Which nowadays no longer exist, we can only think that there are large or small groups. The middle class has disappeared in the publishing sector».

In times of pandemic, one of the talks that are mostly generated in the circles of the literary industry and that copied in LIBER visits was the topic of digital. Luis Solano, from Libros del Asteroide is very clear about what he thinks: «I want to emphasize as a publisher that although we use digital tools, we are making a resoundingly analog product and I hope it will remain so for some time».

Analog is a way of compensating for digital fatigue, as the English would say. In the words of Luis González, «it is clear that contact with knowledge is physical. The growth of the e-book is produced by the absence of the physical book rather than by the digital book (as a product) itself. But this leads us to ask ourselves where the technology is going».

The talk between these four actors of book management and production ended with a clear need to create pacts for reading, not in an abstract sense but in a more directed way to make more agile and efficient the most costly processes and adapt to the level of demand that the public now has with digital sales. In addition to this, they add, demands should be made on the regulator. «I would ask the regulator to maintain the structure, I would ask for support for bookstores and publishers, and also educational policy programs that make more readers since these are made at school. That is what we have to ask for».

Paulo Cosin and Luis Gonzalez ask the administration to create a coexistence between the ministries for culture and publishing. They demand, in this way, educational policy programs that make more readers, since these are made at school. «That’s what we have to ask for. I don’t see any government getting serious about this, we need a state pact between the parties and make reading something fundamental for the state».

Full talk on the Youtube channel of Spain Frankfurt 2022.