Celebrate FiLQ from December 15 to 19 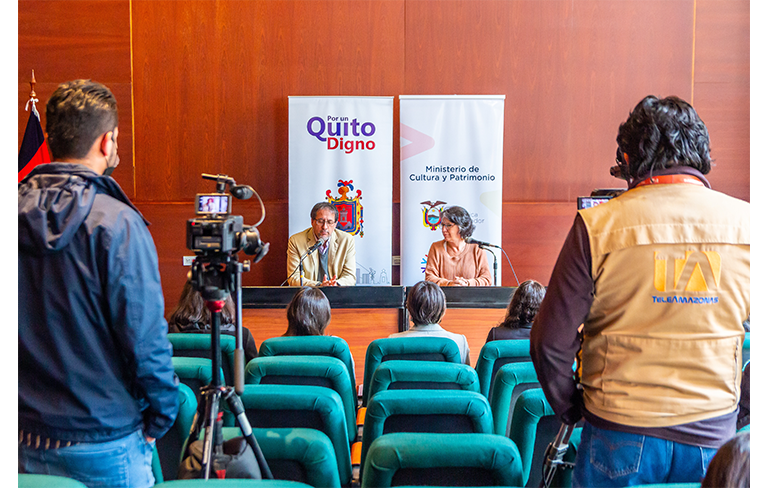 The Ministry of Culture and Heritage and the Municipality of the Metropolitan District of Quito through the Secretariat of Culture announced the celebration of FILQ 2021, from December 15 to 19.

The Vice Minister of Culture and Heritage, Fanny Zamudio assured that the fair contemplates a transition process between the Ministry and the Municipality of the Metropolitan District of Quito to strengthen the National Culture System.

For his part, Juan Martin Cueva, Secretary of Culture of the Municipality of the Metropolitan District of Quito said that the FILQ2021 is a milestone that lands public policy in an articulated manner.

This year’s Quito Book Fair is conceived as a cultural and artistic gathering that brings together local and national cultural and literary groups, enterprises, industries, and collectives in a fundamentally festive day focused on the importance of meeting through books.

The main objective is to encourage the reactivation of a sector (literary and publishing) that has been hard hit by the pandemic, as well as the entire cultural sector.

FILQ 2021 emphasizes the work of writers, artists, publishers, and independent booksellers who have kept alive the country’s cultural production in times of crisis. This event will also include the participation of the Ecuadorian Chamber of Books.

About the call for entries

FILQ 2021 has publicly announced the distribution of stands through the platform quitocultura.com.

The objective of the call is none other than to allocate spaces for the exhibition and marketing of goods, products, cultural, editorial, and literary services on an equal basis. The public call is aimed at publishing houses, bookstores, and publishing or literary projects.

FILQ 2021 will promote reading among children and young people from the children’s and youth pavilion, which will have a specialized center at the Centro Cultural Benjamín Carrión, Bellavista. In addition, oral storytelling, commonly neglected literary forms and languages will be promoted.

The program will include alternative publishing projects and publications focused on gender diversity, the history of the struggle for equal rights, and the resistance of historically discriminated human groups. In this way, the principle of real equality enshrined in the Organic Law of Culture and the Constitution of Ecuador will be complied with.

The conceptual axes that support and direct this fair are the guarantee of cultural rights, both for citizens and artists and cultural managers; the reunion through books; and the enhancement and recognition of national literary and publishing production. Juan Valdano, Jorge Velasco Mackenzie, and Eliécer Cárdenas will be part this tribute to Ecuadorian literature.

FILQ 2021 is the result of technical and joint work between the two institutions in compliance with the Organic Law of Culture that promotes a process of decentralization of competencies and positions the municipal governments as priority actors in development and territorial planning, in addition to energizing the National System of Culture.