Paulo Valente: «I have been the editor, the curator, of my mother’s books» 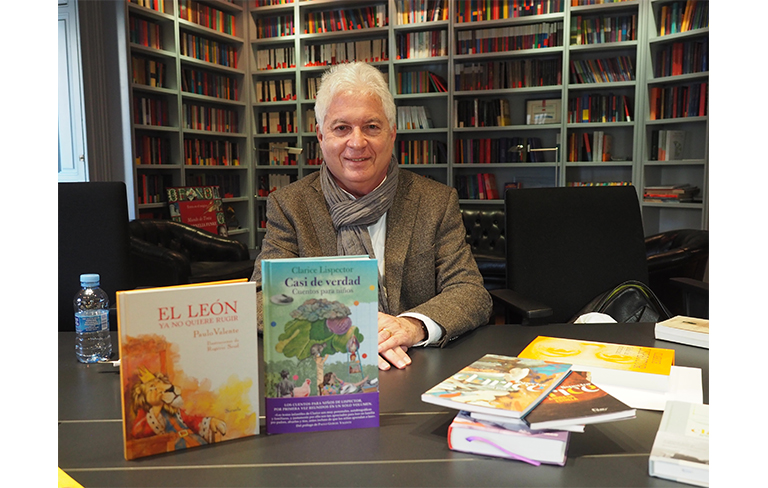 We talked to Paulo Valente, one of the sons of the famous writer Clarice Lispector and the only heir to her complete works.

Paulo Valente (Rio de Janeiro, 1953). Economist and author of research books, a novel with a police angle, and other children’s texts. He learned to tell stories with his mother, Clarice Lispector, and continued the tradition by telling stories to his two children. She was born in Rio de Janeiro, in a family where almost everyone wrote. In addition to children’s books, she has also published books for adults.

What is El león ya no quiere rugir (The Lion No Longer Wants to Roar), the picture book for children published by Siruela?

El león ya no quiere rugir is a picture book inspired by the Carnival of the animals. I listen to a lot of music and I liked this one. From it, I created this story with an educational and important background, perhaps in countries like Brazil where democracy is going slowly. This book was adopted by the Government, for school teachers’ books. They bought 10 thousand copies for school classrooms.

The government buys under pressure, but I am very happy that the book, through the school, reaches more children and families.

«The book is made to teach children at any time how to govern because they do not understand it.»

Why a children’s book that talks about the democratic transition?

This book is about the democratic transition, yes. The book is made to teach children at any time how to govern because they don’t understand it. The figure of the lion is one that all children know: the king of the jungle.

At the Buenos Aires Fair, a children’s activity was carried out with the book, in which a storyteller read the book to the children and at the end of the reading asked them which animal they wanted to rule and then drew pictures of the chosen ruler.

Can we find parallels in those animals suggested by the Monkey with our rulers and characters that «control» us today?

This issue is very important in Brazil because we have a democratically elected ruler, but he is questioning whether the elections are reliable and is threatening, a bit similar to Donald Trump, the citizens regarding the future of his government if he were not elected. Our Brazilian president is a mirror image of Donald Trump.

The pandemic has caused calamities in Brazil that its president did not want to manage properly, resulting in dramatic results not only health-wise but socio-culturally. What is it like to live, write and attend cultural events in Brazil?

In Brazil, there is freedom of the press and freedom of thought, a very favorable point thanks to the last Democratic Constitution. But, on the other hand, the government does not support culture because I believe this president has never read a book, among other things.

Likewise, the Library of Brazil maintains an active annual call, thanks to this Constitution, for the translation of works published in Brazil to other countries, such as Spain.

«I have been the editor, the curator of my mother’s books.»

How does it feel to write LIJ, a genre that, among others such as poetry has been reviled?

In Brazil, there is an interesting work because the government has a program to buy books for schools, so this genre has more momentum thanks to that incentive. All parents and families, in general, are very aware that reading should start from childhood.

To what extent has your mother’s writing, not only children’s writing, influenced your professional career?

I lived surrounded by books because my mother’s publishing house sent as a courtesy all the works they published, so I read practically everything that came home. I always had a special interest in literature.

What does your mother’s legacy mean for the family?

I have been the editor, the curator of my mother’s books. Once during her lifetime, she said, «I don’t know what will happen once I’m not with my work.» I remained silent.

At the end of the day, this work can only be done by me because only an heir can authorize everything, but I do it with love and pleasure, it is like a second profession for me since I am an economist and I am very interested in how each of her books is sold in all countries and with each of their printed formats.

Clarice once said «I am so mysterious that I don’t understand myself», something we can see in her book Cuentos para niños, casi de verdad. Could Clarice solve the mysteries of her work? And you?

No, it was never possible to solve any of the mysteries that Clarice narrated in the stories.

The mystery of the thinking rabbit is a story Clarice wrote for you. A story that has the greatest mystery of all…

One day I asked her for a story for me, and she wrote The Mystery of the Thinking Rabbit, fiction and reality about a pet that always escaped, but you never knew how.

Many children came to write to my mother with that mystery, with its resolution. Even my five-year-old granddaughter thinks about it, has a theory that my brother’s character helped the rabbit at night.

Both her mother’s stories and hers, The Lion Doesn’t Want to Roar Anymore, make a clear apology for our society, for us as individual animals. She loved animals, did she want to carry on her mother’s legacy, is it a posthumous gift to her mother or just a gift to children?

This book is based on, as a major influence, the animal carnival. Of course, it has great influence from Clarice, because she is my mother and I grew up with her and work her writing, but this is something foreign to her stories.

«One day I asked her for a story for me, and she wrote The Mystery of the Thinking Rabbit, a fiction and a reality, about a pet that always escaped, but you never knew how.»

Lispector said at the time, «Not being born an animal is one of my secret nostalgias. Do you think literature transported your mother to an animal universe? And to you, does literature and writing about animals make you an animal?

Today there is a growing awareness of the neurological behaviors of animals. In the U.S., they are studying the intentions of flies, for example. How certain animals behave depends on whether they are male or female. For me, there is a lot of similarity between human beings and animals. We are very similar.

Of Clarice’s stories, which is your favorite?

I love The Mystery of the Thinking Rabbit because it is for me. But the last story, the twelve Brazilian legends, seems to me to be very poetic, not so much childish but poetic. In many publishing houses, they don’t mix stories with legends, they don’t believe that in the LIJ there should be this mixture, but I feel happy, and I think Siruela has been very successful in putting together these stories with the twelve Brazilian legends that my mother has reinterpreted. Even people like Maria Bethania have created a song based on the legend of Uma Perigosa Yara.