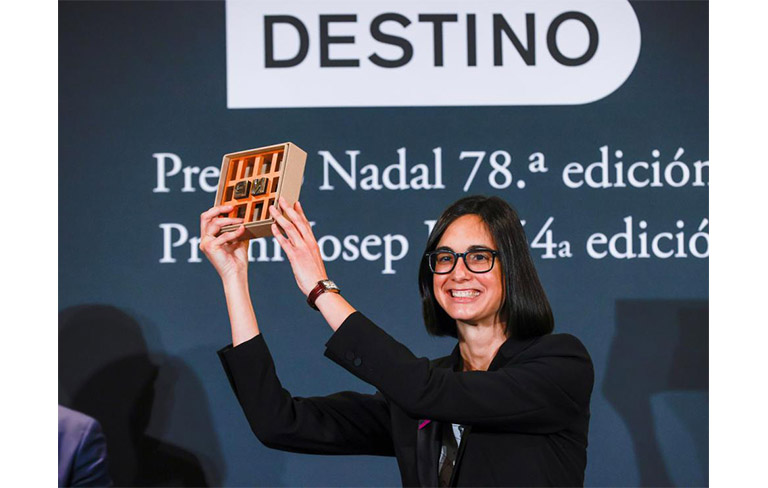 After 78 years, since Carmen Laforet won in 1944 the first Nadal Prize with Nada, another woman, the sixteenth has been distinguished with the prestigious award published by the publishing house Destino, which last year also won a writer, Najat El Hachmi, with El lunes nos querrán. The jury formed by Alicia Giménez Bartlett, Care Santos, Lorenzo Silva, Andrés Trapiello has awarded the prize of 18,000 euros to Las formas del querer by Inés Martín Rodrigo (Madrid, 1983).

Although it was not possible to celebrate the shared tribute to the centenary of Carmen Laforet (Barcelona, 1921 – Madrid, 2004), author of Nada, the inaugural novel of the Nadal 78 years ago, this year’s winner pays tribute to «the most beautiful prize that exists in Spain» and even more so on the centenary of Laforet’s birth: «She won the Nadal but it was the Nadal that won Carmen Laforet», she stressed.

«Any resemblance to reality is pure fiction,» said Martin Rodrigo, who has immersed himself in the history of his family, especially that of his grandmother to write his novel. The fictions we invent for ourselves sometimes come true,» said the writer. If I am here today it is because of my mother, Aurora. Everything I do is for her.

«I decided to write this novel looking for some relief, in the dark times we have had to live through. The words written, read, have been my best refuge,» she said.

With a degree in journalism from the Complutense University of Madrid, Martín Rodrigo is a journalist for the ABC newspaper. She works in the culture section, where she coordinates the Books area of the newspaper, in addition to collaborating with the ABC Cultural supplement. She is the author of the novel Azules son las horas (Espasa) and the interview book Una habitación compartida.

The Eugenio Nadal Award was created in 1944, by Ignacio Agustí to unveil new literary values and he set the date of January 6 as an escape from the tyranny of the Christmas holidays. «The bourgeoisie comes to its term fed up with stuffed turkey, family champagne, howling of the kids, gifts to the mother-in-law. Of weeping, whining, shoddy shooting, childish bugle calls, and anxious to untie so many family ties,» he wrote in his memoirs.