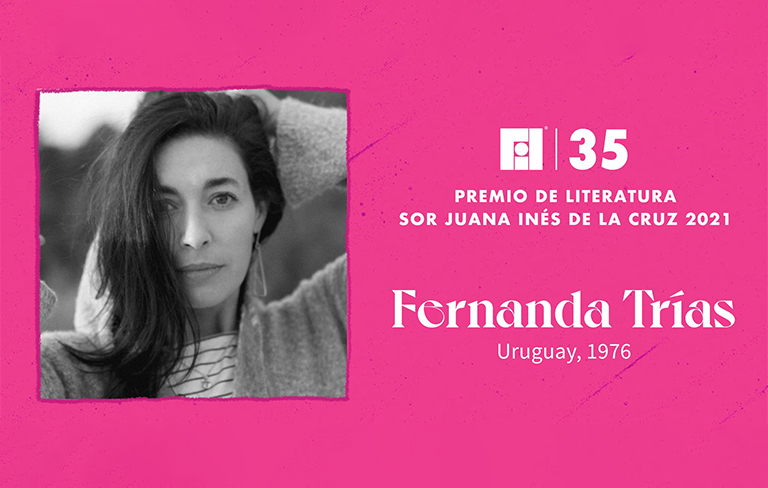 The Sor Juana Inés de la Cruz Literature Prize is a recognition of the literary work of women in the Hispanic world instituted in 1993, which rewards the author of a novel originally published in Spanish. The award is endowed with ten thousand dollars in cash for the winning author.

The Sor Juana Award was conceived and baptized by Nicaraguan writer Milagros Palma. It was conceived to be awarded at the end of the IV International Symposium on Literary Criticism and Women’s Writing in Latin America, which was held as part of the Guadalajara International Book Fair in 1993. After that first award, the prize was integrated into the activities of the fair and has been awarded every year, with the exception of 2000, when it was declared void.

The author won the award for Mugre rosa (Penguin Random House), the novel published at the end of 2020, which had a remarkable reception in the world of Latin American literature. With international reach, it’s a dystopian story about a Montevideo deformed by the impact of a curious disease.

The jury composed of Ave Barrera, Andrea Jeftanovic, and Eduardo Antonio Parra unanimously recognized the Uruguayan for her ability «to look courageously into the void, but also to deal tenderly with the central themes of the definition of what is human, such as illness, uncertainty, empathy, and pain».

In the framework of the Book Fair in Uruguay, just a few days ago Fernanda Trías was awarded the Bartolomé Hidalgo 2021 prize in the narrative for this same novel. This award is granted by the Uruguayan Chamber of Books and was presented at the International Book Fair of Montevideo, which is still underway.

He has been included in numerous anthologies of new Latin American narrative and his stories have been translated into several languages. He received the Unesco-Aschberg scholarship in 2004 and the National Culture Award in Uruguay in 2006. She also received the SEGIB-Eñe-Casa de Velázquez Residency Award given in Spain to a Latin American writer (2017) and her work was highlighted by The New York Times in Spanish in the category of one of the ten best books of 2020. She currently lives in Bogotá, where she teaches at the Andes University and in the master’s program in creative writing at the Universidad Nacional.