Culminates the preparation process for Frankfurt 2022 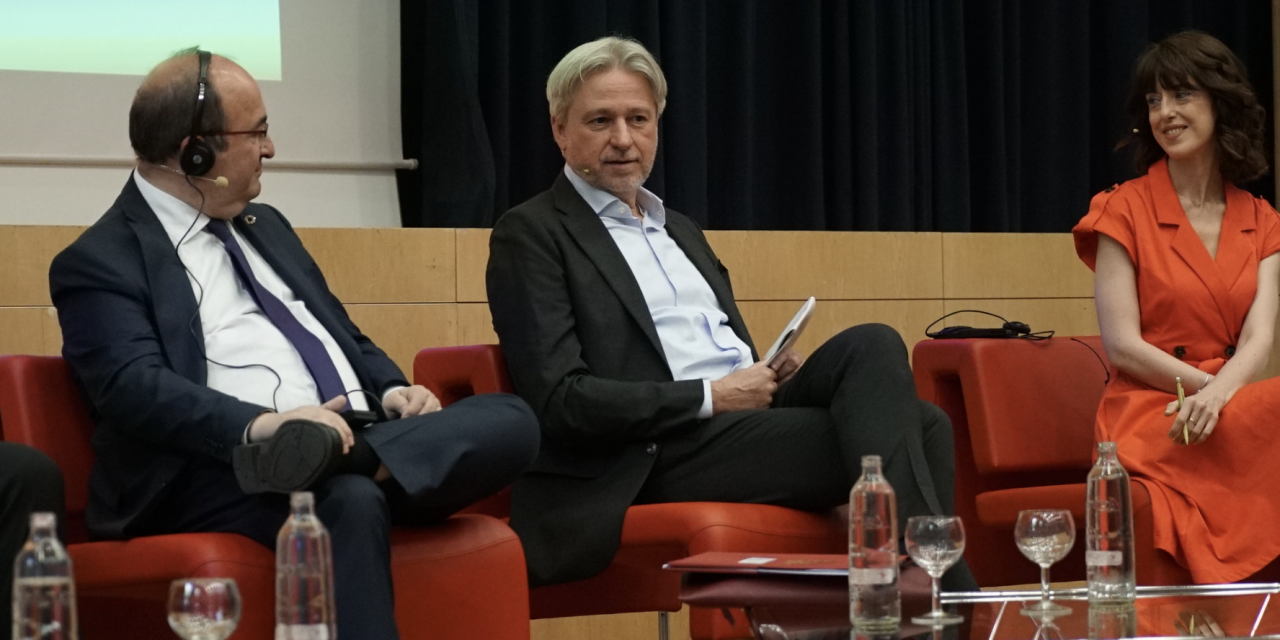 The organization of Spain’s cultural and literary program as guest of honor at the Frankfurt Book Fair 2022 has completed its preparations and is now ready to take off.

On June 9, the Minister of Culture and Sport, Miquel Iceta, together with the curator of the project, Elvira Marco, and the president of the Spanish Federation of Publishers’ Guilds, Daniel Fernández, presented the academic program of Spain as Guest of Honor at the Frankfurt Book Fair 2022 to be held next October. This means that the preparation process for Frankfurt has been successfully completed. Nearly 200 authors will represent Spain and its «Overflowing Creativity'» led by Irene Vallejo and Antonio Muñoz Molina, who will star in the opening ceremony.

The Spain Guest of Honor at the Frankfurt Book Fair 2022 project is led by the Ministry of Culture and Sport through the Directorate General for Books and the Promotion of Reading, together with Acción Cultural Española (AC/E) and the Spanish Publishers’ Guild Federation.

To warm up the engines before landing in Frankfurt they have organized a marathon with which they will flood Wikipedia with #CreatividadDesbordante. Promoted by the Complutense University of Madrid and the German universities of Münster and Regensburg, this wikimarathon will give visibility to all the authors of the academic program in the German version of the collaborative encyclopedia. To this end, more than 70 new entries will be added to the German Wikipedia, and another 15 to the Spanish Wikipedia, in addition to updating the existing biographies in both languages. The event can be followed on June 29 on SpainFrankfurt2022‘s social networks.

Partners of the trip to Frankfurt 2022

From the organization, they have interviewed Luis Zendrera, president of the Spanish Organization for Children’s and Young People’s Books (OEPLI), who advocates taking advantage of Spain’s international opportunity to promote children’s and young people’s literature. «Today’s readers are more demanding, the LIJ has reached a very high level of quality nowadays,» says the also general director of the century-old Editorial Juventud. Proof of this is that many national authors manage to sell in 15, 20, 25, and even more languages. «This was not even remotely the case 15 years ago,» acknowledges Zendrera. And he believes that Spain’s presence as Guest of Honor at the Frankfurt Book Fair «can only reinforce and consolidate this trend.»

At Publishnews we are also contacting many colleagues in the book sector, who will be attending this eagerly awaited fair. Therefore, every week we publish a short interview with each of them in «La editorial camino a Frankfurt».

On June 22, they will present in the city of Main the cultural program that they will deploy not only there, but throughout Germany, on the occasion of their participation in the fair. They will also reveal all the details of the academic program and the pavilion that will host the different activities.