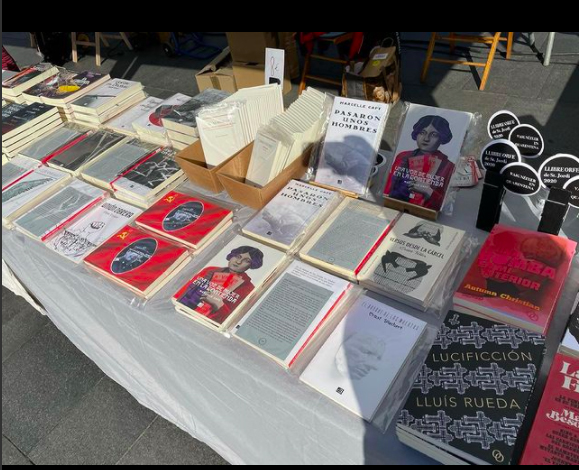 Marta Martínez, founding editor of ContraEscritura tells us why her publishing house has consolidated several popular financing, and if in the end, this has meant more of slavery than the freedom to publish the books she considers necessary.

ContraEscritura began in 2015 with a patronage idea. The publishing house was founded with 200 euros from the rights of the founder’s first poetry book. This money she reinvested in a membership system and the website.

What does a crowdfunding system consist of?

Crowdfunding is a collaborative project financing mechanism developed based on new technologies. Until a few years ago, any entrepreneur or person who wanted to take a personal or business project forward and did not have the necessary money to do so had a few options: ask for a grant, a loan from a bank, or get help from family and friends. However, the arrival of the Internet has opened up the possibility of new alternatives such as crowdfunding.

There are five models of crowdfunding:

When the book appeared, we started translating it, although the costs were unaffordable. Verkami was a great crowdfunding platform for culture, so I started a campaign of six thousand euros. It took us a long time to reach our goal, six days before the end of the campaign we had not achieved it. Most of the participants were friends, associates, and family members. In the end, it came out, not without a lot of effort. It is a book that on a personal level gave us a lot of joy».

With this, the idea of patronage is consolidated, given that ContraEscritura has the maxim that the publishing house will not remain whatever happens by asking for a loan, but will always depend on the resources provided by the publishing house, and its community. «Patronage has been formulated in that sense».

The editor goes on to tell us that «in 2017, two campaigns were made for a long-form journalism editorial line (it did not reach two thousand euros, and the response was very positive). Here we were able to involve bookstores well as we had already been self-distributing for two years. What we did was to set up a series of advertising campaigns in the bookstores so that the booksellers could make the contributions already counting on the reserves of the customers or as information in case any reader was interested in the campaign.

That same year we published the book Una voz de mujer en la contienda, with which we did not have an economic emergency but since it was a censored book, it was logical to publish it in two inks (with the censorship part and the edition that came out at the time). So I mounted another campaign, also for less than two thousand euros, since we were not asking readers to make the book a reality. I know that I have enough community to carry out this type of campaign, so they turned to me again.

2021: the campaign of overwhelm, slavery, and success

Then we came to this year’s campaign: with Kurt Hiller and The Unnamable, a book that I knew was going to cost me a lot because it is historical poetry by an author who had never been translated. It was very costly to value and convince people that what we are doing in publishing is necessary, that we are not throwing money away. And this is very complicated with poetry.

On this occasion, Marta decided to repeat the formula she had used before, which is to publish two books by the same author beforehand or at the same time (because it also works better for distribution).

«This campaign was not created so much for the money, but by a hunch, because I understood that it was a good time to do this crowdfunding. I set it up on Verkami because I needed the pull of its community and the movement of the publisher itself. Although this brought me quite a few problems because there are only 40 days of the campaign, and the platform does not help much to spread the word in their newsletter. Verkami was not willing this time for the book I was proposing to be highlighted and have the echo I needed.

So I had to talk to them to remind them of the basics of mutual cooperation since that’s what these kinds of platforms and projects are all about. Thanks to that, they paid a little more attention to me and included the book in the carousel on the website and sent it in their newsletter to their entire community».

The results were not like those of the first campaign. This shows that this year it was very difficult to move the «non-community», the people beyond the reader and the partner. It was a kind of slavery, something very complicated to make strangers trust the project. Also, on this occasion, it was difficult to get bookstores to support this project because they had to pay in full, many did not understand the campaign well or have not been in a position to contribute, but others did. This is one of the things that the publisher has had a hard time managing with respect to other crowdfunding, with a difference of four years, and that is that the community is alive, that falls in love with the project but also falls out of love. The management of expectations is something that the editor of ContraEscritura has found difficult, given that crowdfunding involves a lot of effort because one shows oneself to be vulnerable.

«It seems more honest to me to ask readers for money for something concrete because then they will know what we want to do. And if they don’t respond, here comes the factor that maybe we shouldn’t do what we do. This system is a direct dialogue with the readers, independently of the economic issues.