Alicia de la Fuente: «The rescue of women writers is something titanic, but we will do everything possible to have their voices in the catalog» 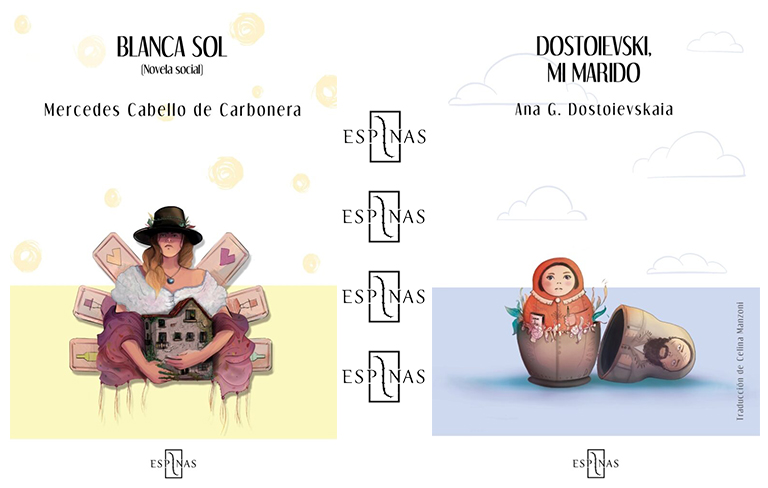 We talked to Alicia de la Fuente, founder of Editorial Espinas, a project that proposes a work of archeology among the silence imposed on works written by women, some of them out of print, others never translated, and others are simply forgotten.

Alicia de la Fuente, editor and founder of Editorial Espinas began with a blog during the pandemic, Escritoras en la historia (Women Writers in History). It was in the moments of isolation and work with her blog when she felt that there was -and there is- a void in the narrative of literature because there are no female referents, neither she feels them now nor did she feel them as a child. For this reason, she has created Editorial Espinas. In the manifesto that appears on the Espinas website we can read the following:

«Girl readers have not counted on the presence of women in said canon, which is why we consider that they may have felt qualms about expressing that they wished to reach such achievements in the field of literature. Today, there is no doubt that literature has been feminized to a great extent. Many women writers already fill pages and pages in newspapers and magazines. Going down to a bookstore is to find a beautiful melting pot of female authors who occupy growing ranks of admirers among the reading community. However, the story they tell us remains unchanged. This is where Editorial Espinas was born. That thorn that, ever since we were little girls, has been stirring and unsettling us. That there were female authors, that we only had to look for them».

Where did the impulse to venture into the publishing world come from?

From the blog I was running, Writers in History, I realized that I was looking for women authors to review, but I had a hard time finding books because they were old or difficult to find. We are talking, of course, about forgotten women, books that are part of the history of world literature.

When I realized how hard it was for me to find the books I wanted, I took an editing course and then launched the project, which I foresaw as viable and was my dream. I feel that it is having a good reception, within the Spanish independent publishing world, which is already expensive…

«For now I focus on literary archeology».

What is the editorial line of Espinas?

I want to focus on rescue literature although I don’t rule out receiving manuscripts from women who are writing today and have no space in the current system, but this much more in the long term. For now, I’m dealing with literary archeology.

You talk about the publishing house in very individualistic terms, do you have more help in the project?

Yes, currently we are only women: myself, the founding editor; Eva Sanchís, who is in charge of web design and SEO content; and Jana Domínguez, who is the illustrator of the book covers.

The publishing house is very new, so you only have two books in your catalog?

What I wanted to illustrate with these books is the origin of the publishing house, besides, coincidentally, we are in the year of Dostoiesvki’s bicentenary, and it turns out that his wife was not published in Spain. This was the origin of the catalog. I thought it was very interesting to see his wife’s point of view since it is the most intimate biography we can access.

Putting together these memoirs from Russia with the book by the Peruvian author Mercedes Cabello (both from the same period) we can notice how in such different parts of the world women have disappeared from the story and why.

And why are they not given a voice?

The reason is easy: they were women. In the case of Mercedes Cabello we don’t know much about her life but what we do know is that when she wrote she was vilified because the book -and this is a reflection of mine as editor- raises the question of what would happen if there was a female Don Juan. The book tries to answer this question.

What books will continue to lead the way, Editorial Espina?

For now, books by Latin American women authors. It is very difficult to access what I want or need, so I dedicate myself to searching the Internet, reading old articles. For example, I found Mercedes Cabello because I was looking for books on the expression of motherhood in Latin American literature. The rescue of women writers is something titanic, but we are going to do everything we can to have their voices in the catalog.

«There should be more bibliodiversity starting with the space and organization of bookstores.»

What books would you have liked to publish in your publishing house?

I would have liked to publish Clorinda Matto de Turner, which was published in September. I would have loved to publish the story of this Peruvian author. Also the Spanish María Lejárraga (Renacimiento) or Concha Espina (also published in Renacimiento). But I am glad that these books, even though they are not in our catalog, are currently coexisting with it, differently.

Do you feel supported by the book industry?

Not at all. I feel there is no help. For emerging publishers there are many obstacles, everything is to pay, and everything is complicated. I also feel that they don’t make it easy. For example, the ISBN used to be free (as in Venezuela today). The Dilve you have to have it because if you don’t have it you don’t get metadata in the online store…

I can’t join any guild because, despite the advantages they offer, it doesn’t compensate me economically. If we launch ourselves to create these projects we should have more help from Culture. I’m also looking for grants in the countries of the published authors, but I can’t find anything, maybe I’m making a novice mistake at the beginning, but I think it happens even to publishers that have been in the market for more than two years…

What do you think about bibliodiversity? Do you think bookstores support smaller publishers?

Everything is false. If we don’t have a space and we are not supported from within, with book rotations, leaving aside novelties, we are not going to reach readers. I wish we were given the opportunity. I am not going to publish 24 books a year, so it would be important to have representation in bookstores. Readers, if they want a Planeta award or a book from more notorious publishers or with representation in the market, they are going to go for them, yes or yes. They don’t need to look for it in the bookstore, they know it will be there. So there should be more bibliodiversity, starting with the space and organization of bookstores.

We have somewhat lost the battles with this. Hopefully, it will.